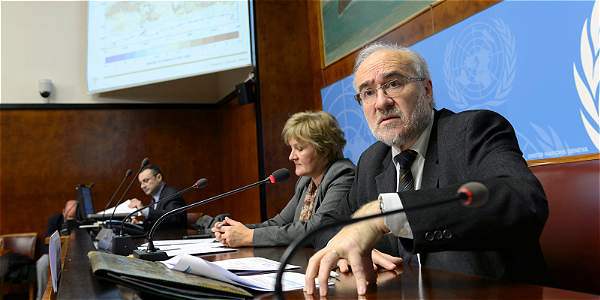 With records of recent months, global temperatures will reach the threshold of a centigrade higher than that appeared in the late nineteenth century, when he was taking industrialization degree in the world.

The data, which was revealed by the World Meteorological Organization (WMO) rang alarm bells, because this degree means you are already fulfilled half the goal that scientists consider necessary for future climate bearable for the environment and humanity .

“If we limit the increase to 2 degrees Celsius, we have heated the atmosphere by more than half and this is very worrying because the carbon emitted will remain for centuries. Time is against us, “said the Secretary General of WMO, Michel Jarraud.

Along with this information, the WMO confirmed that from January to October this year the average surface temperature of the planet will be the highest of the registered until today. So this year would be the warmest on record and 2016 could be even hotter because of the current El Niño.

Although the data provided cover the first nine months of the year, the expert does not hesitate to declare that “greenhouse gases in the atmosphere reached new highs and, during the spring of 2015 in the northern hemisphere, the global average concentration of CO2 exceeded first barrier 400 parts per million. 2015 will probably be the warmest which data are available, with temperatures in the ocean surface to the highest level since measurements began year, “añadióJarraud. “It’s bad news for the planet.”

Besides the years 2011-2015 have been the warmest of that data are available, with numerous five extreme weather events – especially heatwaves – the influence of climate change, according to a five-year analysis by the WMO.

The international organization again confirmed that “have broken several records” not only confirm the accentuation of climate change. For example, South America is recording the warmest year for which data are available, as well as Asia (similar to 2007), and in Africa and Europe is the second warmest.

However, even in Africa there were “many places” where records were broken, said Jarraud, who recalled later that “climate change is not just a matter of temperatures,” but also the increased intensity and frequency acquired by disasters weather related.

The situation is also critical to the oceans have absorbed more than 90 percent of the energy stored in the climate system due to human emissions of greenhouse gases, leading to a rise in temperatures and sea level , according to the WMO he said in a statement.

“In the first three quarters of 2015, the global ocean heat content as much as 700 meters up to 2000 meters depth reached unprecedented levels. The most recent estimates of sea level indicate that the world average during the first half of 2015 was the highest since 1993, from which are available from satellite observations, “says the document.

As a result, in addition to the level of the oceans continues to rise, situations are being detected as an increase in the acidity of the water, which in turn is causing widespread bleaching of coral reefs in the world.

Higher ocean temperatures also contribute to hurricanes and other phenomena of extreme winds penetrate deeper into the earth, as well as the erosion of coastal areas and the penetration of salt
underground fresh water reserves.

This information is made public five days of the onset of the global summit on climate change in which political leaders will face the challenge to agree on measures to reduce carbon emissions to a level that makes it possible to limit the increase in temperatures 2 degrees Celsius in the horizon of the year 2100.

That goal “is still possible, but the more you wait the harder it is, there will be more gas (cause the greenhouse effect) in the atmosphere and even stronger and more expensive actions are needed,” said Jarraud.

Scientists who believe that even 2 degrees is too Jarraud told them, anyway, “one degree centigrade is already behind us, the laws of physics are against us, keep 1 additional degree or less is now impossible and 1.5 degrees is very unlikely. ”

With information from Reuters and Reuters