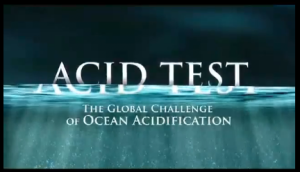 Ocean acidification:
the other CO2 problem. Ocean acidification is a hidden danger caused by increasing atmospheric concentrations of carbon dioxide (CO2). Recently, scientists have shown that burning oil, coal or gas, rapidly changing the basic chemistry of the oceans, making the water more acidic. There is growing evidence that acidification affects marine life around the
world and that within a few decades valuable marine ecosystems
They can be damaged or destroyed.

What is ocean acidification?

The process of ocean acidification
It is surprisingly simple. Of the same
so that carbon dioxide, from
the burning of fossil fuels, it accumulates
in the atmosphere and causes heating
overall, also it accumulates in the oceans,
which changes the water chemistry. When
carbon dioxide enters the ocean, this
reacts with sea water to form acid
carbonic. Since the beginning of the revolution
Industrial, 150 years ago, the sea has absorbed
approximately one quarter of the entire
Carbon dioxide from fuel
fossil, which is equivalent to 500 billion
tons. Therefore, the average acidity
It has increased by 30 percent. By weight, this
It is equivalent to 500 billion Volkswagen
Beetles discharges at sea. Activities
humans are undeniably linked to
changes in ocean acidity. In addition
It is indisputable effect of the
acidification of carbon dioxide, CO2
produced by burning fuels
fossils can be identified and measured in the water
ocean.

A primary concern at the increase
the acidity of the oceans is that it reduces
availability carbonate, a molecule
It is utilized by tens of thousands of species
sea ​​to form their shells, shells
and skeletons. It has been shown that in many
of the species studied were their shells
weaker and slower growth. If he
acidity level rises, ocean water
becomes corrosive, which literally dissolves
shells. The capacity development
body concerned would be in danger and long
term would lead to extinction. Acidification
Ocean could result in a “osteoporosis
global “, harming not only important
commercial shellfish such as lobsters,
crabs and mussels, but also the
key species in marine food webs.
The impacts on the food chain can
affect fish, birds and marine mammals. Exists
evidence that acidification is already affecting
marine life worldwide. For instance,
Pacific oysters have not been reproduced
success in the wild since 2004 and in a
island off the coast of Washington supplant algae
mussels in an intertidal zone. At
Across the planet, one species of coral in the
Great Barrier Reef of Australia recorded a
14 percent decrease in calcification
from 1990 and Antarctica body weight
a kind of plankton is 30 to 35
percent lower than it has been historically. If the
levels of carbon dioxide emissions are not
drastically reduced, the results of this
Stress will multiply and marine life will
disappearing.

Ocean acidification: the problem
beneath the waves

Scientific models indicate that the average
the acidity of the oceans will double
end of the century if we do not lower the speed
at which we burn fossil fuels. The
Scientists predict that the Arctic will be corrosive
for some organisms with shell or
within a few decades and Antarctica in the mid
century. This is just chemistry, the vagaries of
Climate change does not apply to this provision.
It is expected that acidification
oceans threatens the commercial fishing
world, which is an industry of thousands
of millions of dollars. So, also
threaten one of the main sources of
food for hundreds of millions of people.
In the United States, related tourism
ocean, recreation and fishing generate
over 2 million jobs. Many types of
seafood will be affected directly, which
It will affect the fish that feed on them.
For example, Pteropods, marine snails
small they are particularly sensitive
the increased acidity, representing 60
percent of the diet of young pink salmon
Alaska. This could affect more diets
up the food chain, for low
in the salmon population would result in less
fish on our tables.
Coral reefs are particularly
affected by ocean acidification. TO
As you increase the acidity of the oceans,
coral reefs will corrode faster
what can grow, therefore it is feared
the reef structures disappear
all over the world. Scientists predict that
the time that concentrations
atmospheric carbon dioxide reach
560 parts per million (ppm), an accessible level
mid-century because we are coming
400 ppm, coral reefs stop
grow, and even begin to dissolve. The
areas that depend on healthy reefs for
feeding people, coastal protection,
tourism and other profitable industries, will be
deeply affected by his loss.
Solutions to save our seas:
combat acidification requires
reduce CO2 emissions and improve
the overall health of the oceans.

What can we do? We have to move
our lives without emitting large amounts
carbon dioxide. To accelerate our
transition to a clean energy future, we
to enact comprehensive legislation
climate and adopt an energy policy that
invest in efficiency and accelerate the development
of renewable energy sources. But
also we can help defend the oceans
ensuring that ecosystems are
completely healthy. Just as people
with compromised immune systems are
the most likely to die of diseases
common as pneumonia and flu, also
marine organisms are the first to
succumb to pressure, as acidification
Ocean. Implementing a strong
national policy to protect, maintain and
restore the health of marine ecosystems,
putting an end to overfishing and create
marine protected areas and marine parks
national, are three essential steps in
restoration of the besieged marine resources
our nation and our planet.
Ocean acidification: the
Final Warning
Think ocean acidification as a
“Final warning” because we are changing
fundamentally the way it works
planet. We have already committed the atmosphere
planet and budget burning heat
fossil fuel. Considering
oceans represent a larger system 500
Sometimes the weight of our atmosphere, changes in
ocean chemistry indicate an interruption
mass. The future of the blue planet is at stake.